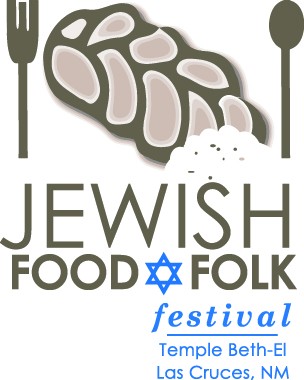 DELICIOUS FOOD, LIVE KLEZMER MUSIC, DANCE AND FUN TO BE SERVED UP AT THIS YEAR’S JEWISH FOOD AND FOLK FESTIVAL

featured at this year’s festival

The Jewish Food and Folk Festival, the only one of its kind in the area, will showcase traditional Jewish foods, such as pastrami sandwiches on rye, knishes, kosher hot dogs, challah, falafel, matzo ball soup, Israeli salad, kugel, hummus, and many more delicacies.

Added to this year’s festival menu: rugelach! Rugelach is a delectable pastry filled with nuts and fruit filling or chocolate.  The rugelach will join the list of delicious desserts you can purchase including chocolate babka, hamentaschen, macaroons and matzo brittle.

Also new to the menu, this year’s festival will feature live music from renowned local klezmer artist Margot Leverett, accompanied by Santa Fe musician Jordan Wax.  Leverett, who recently received a standing ovation for her Klezmer performance with the Mesilla Valley Concert Band, has played and taught klezmer all over the world. She was a founding member of the Klezmatics and went on to lead her own band, "Margot Leverett and the Klezmer Mountain Boys."  She will be accompanied by accordionist Jordan Wax. Jordan was a bandleader and accordionist for a Jewish dance band for years before his work with Missouri and New Mexican music inspired him to travel to Mexico for a 6-month immersion in huapango fiddling from the Huasteca region.  He performs with Lone Pinon, a Santa Fe based band that features roots music of New Mexico.

Festival attendees can also stay busy in the Family Fun Area, where kids can spin a giant bagel for prizes, watch or join in folk dancing with the Mesilla Valley International Folk Dancers, as well as listen to performances from Kolot Bamidbar (Voices of the Desert, the Temple Beth-El choir), and Kolot Noar (Voices of the Youth, the Temple Children’s Chorus).  And don’t forget to shop at the silent auction.

Admission to the festival is $3, kids under 12 are free, and food will be sold at the event.  More information may be found at LCJewishFestival.weebly.com.

This year’s folk festival promises to provide delicious food, fun, and an enjoyable time for everyone!   For information contact Aggie Saltman at 575-649-4356 or lcjewishfestival@gmail.com.